Late last night, sitting in the basement, hoping that the latest bout of insomnia would pass, I got to thinking about some things. So doing was, admittedly, not the best course of action if I was looking to put myself to sleep, but what are you going to do? Brain is going to brain.

Spurred by an earlier chat with one of my dearest dears, I thought about the importance of words (a common theme – back when I spent a whole lot more time hanging about these parts) and the impact of time – in all its conceptual varietals – on the way we use words.

After what can be described, at most, as ‘fitful’ sleep, I woke this morning to discover that I wrote and hit publish on these words a year ago today.

Add to that the fact that ‘FOMO’ cropped up in conversation earlier today, along with my diligent attempts to keep to my goal of 1000 words/day in an effort to get shape and record the thoughts in my head (a narrative that includes a whole bunch of apocalyptic ideations, actually) sometime before the (increasingly likely) end of the world, and I’m starting to feel like January 11 has something in common with Groundhog Day.

So, while I ruminate further on this seeming pattern, here’s a revisiting of my thoughts ‘on this day’ in 2017.

And it’s hard to love, there’s so much to hate
Hanging on to hope
When there is no hope to speak of
And the wounded skies above say it’s much too late
Well maybe we should all be praying for time

These are the days of the…

That’s what Prudentius said anyway.  In the Psychomachia.  In the 4th century CE.

I am very patient most of the time.

I routinely wait, without much effort, for results, feedback, holidays, tardy friends and etc.  Especially the tardy friends.  I am habitually early for things (it’s an illness) and I am friends with a disproportionate number of people who are habitually late (also an illness) so I spend a whole lot of time waiting for people to show up.

I’m okay with that.  I almost always have a book on me so the time is generally well spent.  No point in stressing about a personality quirk in a good friend (THEY are the ones with the quirk, never me).

Unless the lateness makes US late for something else.  That I have a problem with.  I CAN control my behaviour, and I hatehatehate being late for commitments.

Really, the only times I get truly impatient is when I am trying to do something fiddly and it’s not working out, I can’t find something I’m looking for despite the fact that I know FOR SURE that I put it right there the last time I used it, and, most of all, when I am waiting for something to happen.  Something that I’ve been told will happen, but that is taking its sweet sweet time.

It’s probably symptomatic of some outrageous level of control-freakdom. 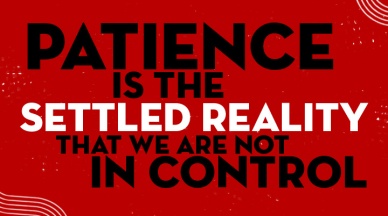 If you tell me to anticipate something, I do.  Anticipate it.  Often with increasing anxiety when it doesn’t show up according to a reasonable (as decided by me, of course) time frame.

Situations when I’m told to look for further information or follow-up ‘in the next few days’, or ‘early next week’, or ‘before the end of the month’ make me nutso with the waiting.

Lack of specificity is my nemesis in the waiting game.

All this technology and access to various forms of communication serve to make it waaaaaay worse.  Although I am not normally one who has to be constantly logged in (I can generally forget my phone at home and be fine with that, or turn the computer off for days at a time without jonesin’), when I’m waiting for something, I start to obsessively check my email.

And if a subject line in the Inbox catches my eye that looks like it might be what I’m waiting for, something wacky happens to my breathing and I get all tense and jittery.  And then, when the email isn’t what I was looking for, I sign out and try to focus on something (anything) else, but really just go back to checking every 4 minutes or so.

I could never be an apocalyptic.

In order to buy into an apocalyptic worldview I’d have to (among other crazy things) resign myself to the fact that the end, or the return, or the justification, or the final battle is going to happen maybe sometime.

I’d be a nervous wreck after a week.

That new era?  Second Coming?  Final Judgement?  Ascension of the Antichrist?  Extraterrestrials showing up to take us to another planet?

If it’s not something I can put down on my calendar as definitely coming on January 22, 2014, then I don’t want to even know about it.  And don’t just tell me it’s going to happen on January 22, 2014.  You’d best be showing me solid proof that it’s all going to go down then.

And none of this 24-hour cancellation policy stuff either.  If it doesn’t happen then you’re going to have to pay me for the missed appointment.  I am a Doctor (okay, of Philosophy.  But still).  I should be able to charge for missed appointments like dentists and physicians.  Especially since not showing up to end the world/era/whatev is far more serious than missing a cleaning appointment.

Oh, another thing about me and waiting?

When I’m nervously anticipating stuff I have a tendency to procrastinate.

Not that I’m doing that right now or anything.

The Eschaton.  The End of Days.  It seems to be everywhere lately.  There are television shows, movies, books and seemingly constant news articles about various ways in which society as we know it might be brought, abruptly, to a problematic conclusion.

There are viruses, plagues, earthquakes, aliens, and, pretty much everywhere you look, zombies!  Zombies!  ZOMBIES!  From the Walking Dead to World War Z(ed)- they are among us and just waiting to rise and make life even more miserable.

I wrote here about societal anomie and how it leads to expressions of anxiety that include apocalyptic stories.  The apocalyptic tradition has provided some of the best, and most enduring myths.  They endure, in part, because periods of great collective social anxiety tend to be cyclical.  As the stresses return again and again, the idea that there is something better (or at least different) that will redeem us while punishing those responsible for the stress- albeit after a period of complete lousiness- is quite attractive.

Apocalypticism is one of the major literary trends in Second Temple Judaism and early Christianity, often representative of the uncertainty of the of the sociopolitical environment of the time.  As is the case with other hermeneutical categories found in the historical and literary studies of Judaism and Christianity (gnosticism is another such category- we’ll explore that one later), the designation ‘apocalyptic’ is often too-freely or non-specifically applied.

The myths of all cultures reflect the issues and beliefs of the times specific to each composition.  The apocalyptic tradition developed as a response to the perceived disparity between expectations and the reality of the societal situation faced by the Jews of antiquity.

Apocalypticism can be defined as “a type of religious thinking characterized by the notion that through an act of divine intervention, the present evil world is about to be destroyed and replaced with a new and better world in which (a) god’s justice prevails.  Apocalyptic schemes usually involve a moment of judgement, in which persons are called upon to answer for the evil of the world and are either acquitted to salvation in the new world or convicted to suffer divine punishment or destruction” (J.S. Kloppenborg, Q-Thomas Reader, 1990).

Dealing with the such realities as exile and diaspora, apocalypticism as a literary expression and theological speculation developed according to societal and religions necessity.  It was used variably as legitimation for political and religious propaganda, and to fulfill a socially perceived need for justice, transforming from a vision of messianic prosperity to one focusing on expectations not being met.

As a nascent religious movement, Christianity arose during a time of upheaval caused by foreign (Roman) domination of Palestine.  The issue of this dominance was relevant to the people involved in the Jesus movement and the authors of the writings that would eventually form the New Testament (along with the many contemporaneous non-canonical myths and writings).  Problems associated with justice and right order plagued the early Christian inheritors of the apocalyptic tradition as it had inspired their authorial predecessors.

Obviously, the current definition of apocalyptic has expanded to include all manner of potential cataclysms- either originating in this world (in evil laboratories or through nature rebelling against the repeated abuses to which it has been exposed at the hands of humanity) or from somewhere beyond (the myriad alien invasions from outer space or the reappearance of Lovecraftian creatures from the centre of the earth).

Regardless, these stories reflect the continuum of a mythological tradition that arises in response to significant disconnects between social expectations and the reality of the day.  Even when presented with tongue-in-cheek humour- think This is the End– now in theatres, or the upcoming, much anticipated (I really would like Simon Pegg to be my best friend) The World’s End.

In a social reality which, in one week (sigh), sees ever-increasing evidence of political corruption and the mishandling and violation of public trust at ALL levels of government and regardless of particular ideological affiliation, it really is no wonder that we are revisiting the mythological themes behind the apocalyptic vision.  When those we have elected to look out for the best interests of all citizens are not delivering the expected level of justice, frustration levels are made manifest in many ways.

Apocalyptic angst- as it appears in popular culture and literature- is a prevalent contemporary use of mythology that clearly demonstrates the truism ‘plus ça change, plus c’est la même chose.’  We express our anger and dissatisfaction with the status quo through our various creative outlets.

The ideological forecast for the summer seems to be rife with apocalyptic thinking.  It will be interesting to see if such murmurs of discontent garner results in the larger societal context.  They will certainly provide entertainment and something to think- and blog- about.