(Following hard on the heels of my post regarding the reprehensible treatment of educators here in North America, came more news that truly put me off my food for the duration.)

It is terrible that we in no way adequately compensate so many of the people who study hard, achieve their academic goals and hone their teaching craft as an extension of a sincere vocation that impels them to teach the next generations and give back to society in a very real way by so doing.

So I guess my back was already up and I was feeling somewhat battered and raw by the latest evidence that the things I hold to be vitally important don’t seem to be the things that society values and nurtures.  That’s a crappy thing to be thinking about heading into the weekend.

After a long week of work and with a longer list of things to get done at home, I opted to take a break last night and catch up on some mindless television (or maybe read a novel- if I was feeling really motivated) as the laundry laundered.  The tv went on in time to catch the local news.

The Big Story was about Blackberry and its seemingly endless downward spiral.  I’m not a Blackberry user, so I’m not invested one way or another in the brand.  I do feel for the thousands of employees that now find themselves jobless, and I have some concerns about what this latest blow may do to the employment market here in my neck of the woods (admittedly some real self-interest there.  Never claimed to be a saint), but I’m not enough of an economist or financial analyst (as in, I’m in NO WAY an economist or financial analyst) to really know what might come of the whole thing.

The same CUPE Listserv that sent the article about Margaret Mary also sent a notification that there would be crisis counselors on hand at Carleton for the coming days, offering shoulders to lean on, since there were two students among those who lost their lives.  The community is banding together and coping as best they can in a situation that can only be described as shocking.

Shocking and random and horrifying.

And then the anchors started talking about an inexplicable recurring phenomenon here in this town I call home.

Mayor McCheese hanging with his buddy the Hamburglar.  Apropos, non?

Last night’s gala was the second one this summer.  The first took place earlier in the season out in the East End as a means of maximizing his public image as he worked to ‘bring the subway to Scarborough’.  Good turn out- of those who wanted the subway, regardless of whether or not it was something that was remotely cost-effective or practical for the numbers of people who need to be moved on public transportation on a daily basis.

Yet, they show up to see the guy in DROVES when offered a burger or a hotdog.

What is wrong with us as a society that we routinely marginalize those who opt for education and selfless public service as a way of life, while CELEBRATING an ignorant, possibly criminal, buffoon because he claims to be out for the ‘simple folk’ of Ford Nation?

He won the mayoral race on the basis of a catch phrase about freakin’ gravy and the train it rode in on.

That, and because he arguably had no real opposition.  George Smitherman was severely damaged by his connection the Provincial e-Health scandal and by the unfortunate truth that an urban gay man still doesn’t play all that well in the 905.

(The sad thing is that it might happen again.  The host of our cottage weekend had us all up in arms and ready to tie him to a tree with his assertion that he will vote for Ford- whom he despises as much as the rest of us- if the only other option is the person who seems likely to make the shift from Federal back to Municipal politics to throw her hat in the mayoral ring next Fall.  If it comes to that, the rest of us will likely have to kidnap Will and tie him to said tree until the election is over.  For all our sakes.)

Ford played to his base- the suburbs- and has since continued the systematic dismantling of the downtown core.  He put the kybosh on  Transit City and has screwed up the planning already completed by Metrolinx- an organization that was restructured and put into place in an effort to keep the politics OUT of the evolution of public transportation in the GTA- and ended up with two whole subway stops in Scarborough to show for it.

His motion to put a Ferris Wheel (among other such things) in the Port Lands development, and his push for a casino in the city, were, thankfully, shot down.  As they fully deserved to be.

His personal antics are a continuing source of embarrassment (whether or not he smoked the crack/said the things he said)- and still make international headlines, sullying the name of the city. 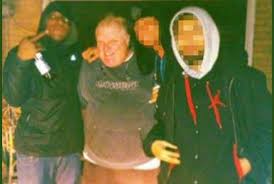 Still all kinds of unanswered questions about this photo and the people in it.
‘No Comment’ says Mayor McCheese

That we have an under-educated, inarticulate and self-serving joke running the city into the ground is bad enough.  But what’s worse it that there are way too many people that are supporting him as he does so.

At least 20 000 of them were expected to show up for free burgers and beer last night.

And not all of them are even from the ‘burbs.

I hear arguments from his supporters that frequently begin with the assertion that it is the ‘white 416 elite’ of this city that are most vocally opposed to the Mayor and his cronies/cronyism.

Being honest, there is some level of truth in that.  The media, in particular, has been known to stoop to less than appropriate levels of journalistic integrity in their criticisms of Ford.  That isn’t to say that the guy doesn’t have a serious persecution complex about certain media outlets, but there really didn’t have to be quite as much coverage of his drunken stumbling during Taste of the Danforth as there was.

The Marg Delahunty thing was hilarious though.

Are there those of us who would prefer to have a municipal representative who can speak articulately and authoritatively and who has at least a passing knowledge of Canadian geography?  Um, yes.  Yes we would.

Would we prefer a mayor who managed to complete his higher education, indicating that he might at least have been exposed to some of the history and workings of the wider world outside of Etobicoke and Florida?  Again, yes we would.

Would we prefer that the mayor of the country’s largest and arguably most multicultural city wasn’t racist?  Uh huh.

Would we prefer a mayor who actually has the ability to set aside the politics and the wants of his Nation in favour of plans and programmes that will benefit the City as a whole?  Yes.  PLEASE.

And would we prefer a mayor whose ego isn’t so disproportionately huge that he thinks he is outside of the law and not subject to conflicts of interest?  You betcha.

If such opinions are indicators of ‘416 elitism’, then mark me down as ‘guilty as charged.’

Unfortunately, short of de-amalgamation, which seems unlikely to happen at this point (although here’s a petition for that very solution, if you’re so inclined to support a good cause), I’m really at a loss as to how urban Toronto will recover and move forward in becoming the world class city it should be.

It’s not going to happen under the thumb of Mayor McCheese and his Brother Behind the Throne.

And he will be hard to get rid of if he is still managing to keep as many people as reported drinking the beer at his celebratory barbeques.

I turned the tv off long before getting the 11:30 local news update confirming the number of attendees.  I actually couldn’t bear to have it confirmed.  Maybe 20 000 people DIDN’T show up to pat this guy on the back.  I’ll live in that ignorance for the rest of the weekend (birthday celebrations to attend today!) so I can still hope for some collective sense.

I guess Ford Nation isn’t alone in its tendency to delusion.

P.S.  To be honest, I’m not sure who first started calling the guy Mayor McCheese (the use of that tag has become ubiquitous here in TO), but it is a reference that fits for oh so very many reasons.  Still, I’m thinking the REAL Mayor McCheese would likely have a pretty strong case for defamation, had he not completely disappeared from McDonald’s marketing campaigns many years ago.  So, just be to safe:  No direct offense is intended against any cheeseburger-headed mayors who used to shill fast food with large, purple, milkshake-loving gum-drop shaped monster-things.  I always liked your top hat and jaunty striped trousers.