This evening, over the course of fairly standard dinner conversation, I was asked why atheists needed to be considered under the same aegis as any other religious group- and why the Human Rights Tribunal of Ontario was getting involved.

I had no idea what she was talking about, but my first thought was essentially along the lines of ‘holy cows, these New Atheists are becoming as dogmatic and doctrinaire as those ‘believers’ from whom they wish to distance themselves.’

My inquisitor sent me this link to a recent ‘Day 6’ discussion on CBC radio.  According to the National Post the case was brought by a a father- from small town Ontario- who, as a ‘secular humanist’ objected to the distribution of Gideons’ Bibles in the public school his children attended.

He countered this by suggesting that Just Pretend: A Freethought Book for Children be made equally available.  The Niagara District School Board did not agree with his suggestion, so the gentleman in question took them to the Human Rights Tribunal on the basis of “discrimination because of creed.”

Okay.   In 2013, what the bleeding hell are the Gideons doing in the PUBLIC SCHOOLS of Ontario passing out bibles?  Unless the bible is being discussed for its value as the mythological representation and source of three of the world’s major religions from a scholarly (i.e. not belief-based) perspective, it does not belong in public, tax-funded schools.

Likewise, texts stemming from other world religious traditions should not be present in our public schools except as indicators of history and cultural development, illustrating the similarities and differences that have marked humanity’s evolution.

I, like Mr. Chouinard, self- identify as a secular humanist (or Big-H Humanist- whichever you prefer).  I believe that human decisions have to drive our morality and ethics, but also that we are more than capable of coming to the right moral and ethical decisions without the presumed intervention or influence by any kind of supernatural actor- whether good or evil.

The interworld is full of pithy little posts like this one.

If you’ve been visiting me here at colemining for any length of time, you’ve probably caught on to that by now.

I am an atheist.  I do not believe in any deity/deities nor do I assign such creatures roles in the creation/governance/maintenance/destruction of the universe- both known and unknown.  I believe we create our deities- giving them the characteristics of the other humans we encounter- good, bad, mischievous, helpful, indifferent- and that continuing to rely on these external forces (when we should have learned better by now) is irresponsible and, frankly, a cop out.

All that said (and I will likely say it again), I also do not get- at all– the seeming need of atheists these days to band together into societies, or churches, or Kaffeeklatsch or whatever.

So much of the activity and response I see on atheist websites and chat groups and blogs and television appearances is unreasonably hostile and, well just plain jack-assery.

I saw a recent blog post actually bemoaning the prevalence of atheists who are total jerks, and talking about why they should just freakin stop it.  Had to concur.  The defensiveness and hostility is painful to witness- and it often only very thinly veils an ignorance as deep- and often as ugly- as anything that they are claiming their ideological opponents are guilty of.

Dialogues in which you call your opponents ‘stupid’ aren’t likely to be all that productive- or all that legitimate, argument-wise.

One of the beautiful aspects of Humanism, regardless of specific type or form, is that it respects other humans- for their perspectives, beliefs and ability to contribute to discourse in a reasoned and open-minded manner.

Do I want any one particular faith group having any kind of toe-hold in the public school system that is funded by my tax dollars?  Of course not.  Do I believe that atheists/humanists/secularists can/should be lumped together in any real ideological groupings?  Again, big nope on that one.  People believe/disbelieve different things for all kinds of reasons- and the reasons are not always going to jibe with my own.

And that’s okay.  I can likely learn from them, and hope that they can learn from me.  As I have learned things from people of faith- in all kinds of different things- that I have met over my lifetime.  And as my many students- those who lay claim to a particular religious background and those who do not- have, hopefully learned from me.  From my example and from my perspective.

Atheism is not something that is new and novel (although to hear some people talk, you’d think they came up with the whole thing all by themselves just now). 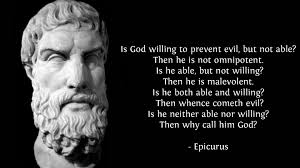 This guy was talking about it back in the 4th century BCE.

Angry anti-religionists are just as ugly as angry pro-religionists.  I’m not sure why people can’t get that through their heads.

The bitchy back-and-forth fire-and-brimstone vs. reason-and-science has grown tiresome.  Scholars, like Jacques Berlinerblau from Georgetown University in particular, who are emphasizing the importance of regaining true secularism in our political systems- these are the discussions and arguments to which I am paying the most attention at the moment.

Religion, as a human phenomenon, is here to stay.  Short of state-sanctioned ‘reconditioning’ like that seen in Rod Serling’s Twilight Zone episode ‘The Obsolete Man‘, no one is likely to change the minds of a vast proportion of the population of the world.

I’m not sure that we should be aiming for that sort of thing anyway.  In truly free societies people get to think what they want to think provided it does not negatively impact the lives of their fellow citizens.  This, as Professor Berlinerblau argues in How to be Secular, involves a true separation of religion and State.  We must rethink those laws and policies drawn from putative morality based exclusively in one belief system or another and separate them from the political systems we rely on to govern us, teach our children and provide for our sick, economically and socially challenged citizens.

Adding more voices to the cacophony of groups looking for ‘special considerations’ under protections afforded to proponents of religions (or non-religions as in the recent case as decided by the Human Rights Tribunal) is missing the point.