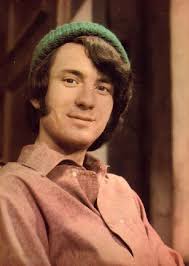 I have to admit I came to this quite late (as in, not in the 60s), and primarily under the influence of two friends in particular- as vastly different as they may be.

One of them remembers watching Monkees reruns in the 70s as a young child, and then again in the 80s on MuchMusic.  As a mere infant, she learned the lyrics to every song off the four albums she inherited from her aunt, the way some children today learn the songs of the Wiggles (or whoever else may be top of the toddler pops at the mo’).  She wanted to marry Mike and have Davy, Micky and Peter be her older brothers.  Much older- in that they were more or less contemporaries of her parents.

I have to admit that when I watch those old episodes (both seasons conveniently available on DVD) it is impossible not to imagine that they have been frozen in time as those four young musicians trying so incredibly hard to make it in the business as they lived in their beach ‘pad’ and ran into weekly difficulties with international royalty, criminals and spies.  And monsters.  And even the Devil, once.

For all their detractors- and there were many- there was an innocence and ‘niceness’ to the whole Monkees thing that the cynical music press made much of yet which ignored the fact that these four guys made some pretty awesome music together.  And they were funny and remain endlessly endearing.

The only real pain they caused their fans came with the untimely death of Davy Jones a little over a year ago- and that was hardly something for which they can be blamed.

In a poignant twist, that very sad leap year day back in February 2012 started something pretty wonderful.  The Monkees toured again.  First together, then Michael on his own and now, this summer, together again.

This turn of events has demonstrated their talent and longevity- both individually and collectively- and has started people talking about them again.  In an interview with Rolling Stone, Papa Nez talks about all the rumours and stories and myths about them not playing their own instruments in his singular style.

The second source of influence that brought them all into my permanent awareness was an older friend (older as in the time I’ve known him and in chronological years) who discovered Michael Nesmith and then the Monkees way back in the 60s when they first popped onto the pop cultural radar.

This friend can, and does, wax very poetic about his long-term admiration for Michael Nesmith, and we have had years of conversations about all that he has contributed to culture- popular and otherwise- over the past 50+ years.

In addition to the music- his solo stuff, the First National Band, the songs he wrote for other artists and etc.- Nez is responsible for the invention of MTV (when it actually played actual music), the producer of such cult classic films as Repo Man, the author of novels, an early interworld innovator and overall supporter of art and artists.

The Gihon Foundation- established by his mother, Bette Nesmith Graham, the inventor of Liquid Paper- was formed to provide private philanthropic support of the performing arts.  As President and Trustee of the Foundation, Michael gathered intellectuals from a diversity of fields to identify and address the important issues of the day.

His first novel, The Long Sandy Hair of Neftoon Zamora- which I came across quite by accident in a bookstore shortly after it was released in 1998- confused me more than a little the first time I read it.

When I reread it, for the first time, I realized that Nez was playing with the mythology of the American Southwest in a very all-encompassing way.  There is magic, music and myth all rolled up in a seemingly autobiographical love story that takes us across worlds and realities.

Each subsequent reading brings to light more and more of its sense of wonder and lyric adventure as it plays with mythological concepts and characters.  Neftoon, and his second novel The American Gene (which is available as an online download from his website http://www.videoranch.com) demonstrate the extent of his prowess as an artistic innovator.

Now in his 70s, Michael has just finished a solo tour and is preparing to head out again with Peter Tork and Micky Dolenz this summer (I’m very much hoping that they come up our way- something I’d so like to see).  He contributes wonderful occasional blog posts on his Facebook page- keeping those of us who love him up to date on his domestic and musical doings and apprising us of how things are going with his dog, Dale.

The world could use more creators like Michael Nesmith- an artist who recognizes the real value of art, music and story and who is willing to push the envelope and create new forms and formats to allow for the expression of human creativity in all its manifestations.

It’s almost Friday.  It’s been a rough week and I’m looking forward to the weekend.  What better way to set it all up than with four of my favourite guys singing a little ditty (in mixed meter, partially- 5/4 time), written by one of my real heroes, while settling in to read (yet again) a mythic tale of captivating voices and how they can lead us into journeys of self-discovery?